It is a criminal offence to record your driving test. Do not do it. The dvsa have reviewed their policy below.

DVSA has concluded its review of the policy on filming driving tests. The agency has decided to maintain its general policy of not allowing the recording of theory or practical tests.
However, cameras fitted for insurance purposes will be allowed providing they:
· are external facing and do not film the inside of the vehicle;

· do not record audio from the inside of the vehicle.
DVSA will under no circumstances accept, comment on, or review audio or video footage provided by a test candidate or third party to facilitate a challenge to the conduct of any theory or practical test or its result. Any footage received in connection with an allegation of criminal activity or intent will be referred to the police.

The promised reduction in theory tests has arrived.

thus is without doubt the most heartbreaking thing I’ve ever watched. Watch it all then SLOW DOWN.

From oct this year, YOU CANOT transfer ownership of road taxation with the car at point of sale. The new owner must tax it themselves and you must claim the refund. Spot a way of dvsa making money through none claims?

British car owners are being urged to make sure they are aware of new road tax laws which take effect from October this year. One of the new rules prohibits sellers from passing on the outstanding period of road tax with the sale of a car.

The DVLA has been advising UK residents that paper tax discs, which have been in use since 1921, will become obsolete for the last couple of years, with their total removal to apply from 1 October 2014. From that date, drivers can choose to manage their road tax online, through the Post Office or with Direct Debit payments. Enforcement will be via DVLA and police cameras with number plate recognition technology, which can check automatically whether a vehicle is currently taxed or SORN, rather than checking that paper tax discs are affixed to windscreens.

The DVLA believes the new system will not only make it more difficult for drivers to get away with driving untaxed vehicles but also cut down on administration costs to an estimated £10 million annually. The DVLA produced 42.2 million paper tax discs, with a total weight over 72 tonnes – more than a Challenger 2 tank.

Car owners must also be vigilant in ensuring that the DVLA is informed of any change of car ownerships, and any unused tax cannot be transferred with the vehicle. Drivers, instead, will need to claim a refund for the remaining taxation period. Sellers who fail to notify the DVLA that their vehicle has been sold risk a fine of £1,000, in addition to being on the end of any speeding or parking offences incurred by the new owner, resulting in further fines and possible licence penalty points.

The DVLA is reminding car owners that it is the seller’s responsibility to return the V5C registration document complete with details of the sale, rather than relying on the new owner to do so, and owners who scrap their vehicles must be in receipt of a Certificate of Destruction, as given by an authorised facility. Until the documents are sent off, drivers are likely to be held liable for any transgressions committed by the car’s new owner.

Motoring organisations, however, are concerned that drivers will unwittingly break the law if they do not know or understand the new rules. The DVLA has produced a short film called ‘Goodbye to the tax disc’ to help car owners understand the new scheme.

Congratulations Emma Cheek on passing today. A well deserved one. A monumental effort!! 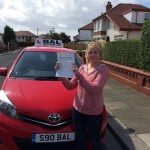 With the staggered reduction in theory test fees this next article surprises me. Normally a reduction in 1 fee is followed by a hike on another. All I can put this down to is there will be no paper counterpart with the new one.

Driving licence fees are set to fall by up to 32% under plans announced today (28 July 2014) by Chief Secretary to the Treasury, Danny Alexander, and Transport Minister Claire Perry.

The proposals are contained in a public consultation on driver licensing fees. The consultation sets out a proposed reduction in driving licence fees of 32% for digital transactions and 15% for paper applications.
As part of the proposals, drivers who apply online for their first driving licence would see the fee drop from £50 to £34. Drivers who renew their licence after 10 years would see the fee drop from £20 to £14. All driver tachograph cards would fall from £38 to £32.
Chief Secretary to the Treasury, Danny Alexander said:
I have been working hard to drive savings across the whole public sector and it’s great to see the benefit of these efficiencies feed through to drivers and businesses pockets. What the DVLA have shown today is that you can do more for less.
Transport Minister Claire Perry said:
The cost of driving can be significant, especially for new drivers. I’m pleased to say that we are planning to save drivers £18m a year by cutting licence fees, thanks to the DVLA making significant savings to their running costs.
The proposals are set to save drivers nearly £18 million and the industry around £2 million every year.

DVLA is currently reviewing all the fees they charge to motorists and the consultation launched today is the first step in this ongoing review.
The consultation closes on 25 August 2014.
-Ends-
Notes to editors
View the current driving licence fees
Subject to the consultation and parliamentary process the new fees are planned to come into force by 31 October 2014.
The consultation is the first phase in the DVLA review of their fees. The second phase will involve a comprehensive review of the DVLA’s funding and will focus on the way they deliver their services to customers in light of the introduction of further digital services.