The (DVSA) will test the system this September and roll it out in spring 2018 as the DVSA plans to modernise tests and to prepare for driverless cars. Searching under the dash to find your license will soon be a thing of the past. By next year motorists will be able to store digital licenses on their smartphones. The DVSA will trial the system this September and hopefully roll it out in spring 2018. CEO Mr Morley tweeted a photo of a prototype for a digital licence which showed an iPhone screen displaying the image of a licence in the Apple Pay app. Morley insists it will be ‘quick, easy and secure’ to prevent forgeries but plastic licenses will still be available. He wants the free digital service to allow people to share and validate information with ‘trusted’ third parties such as employers and insurers.

Find out how the rules will work in the full announcement.
You can also read a blog post about how this will affect Pass Plus, what new drivers think, and what guidance will be 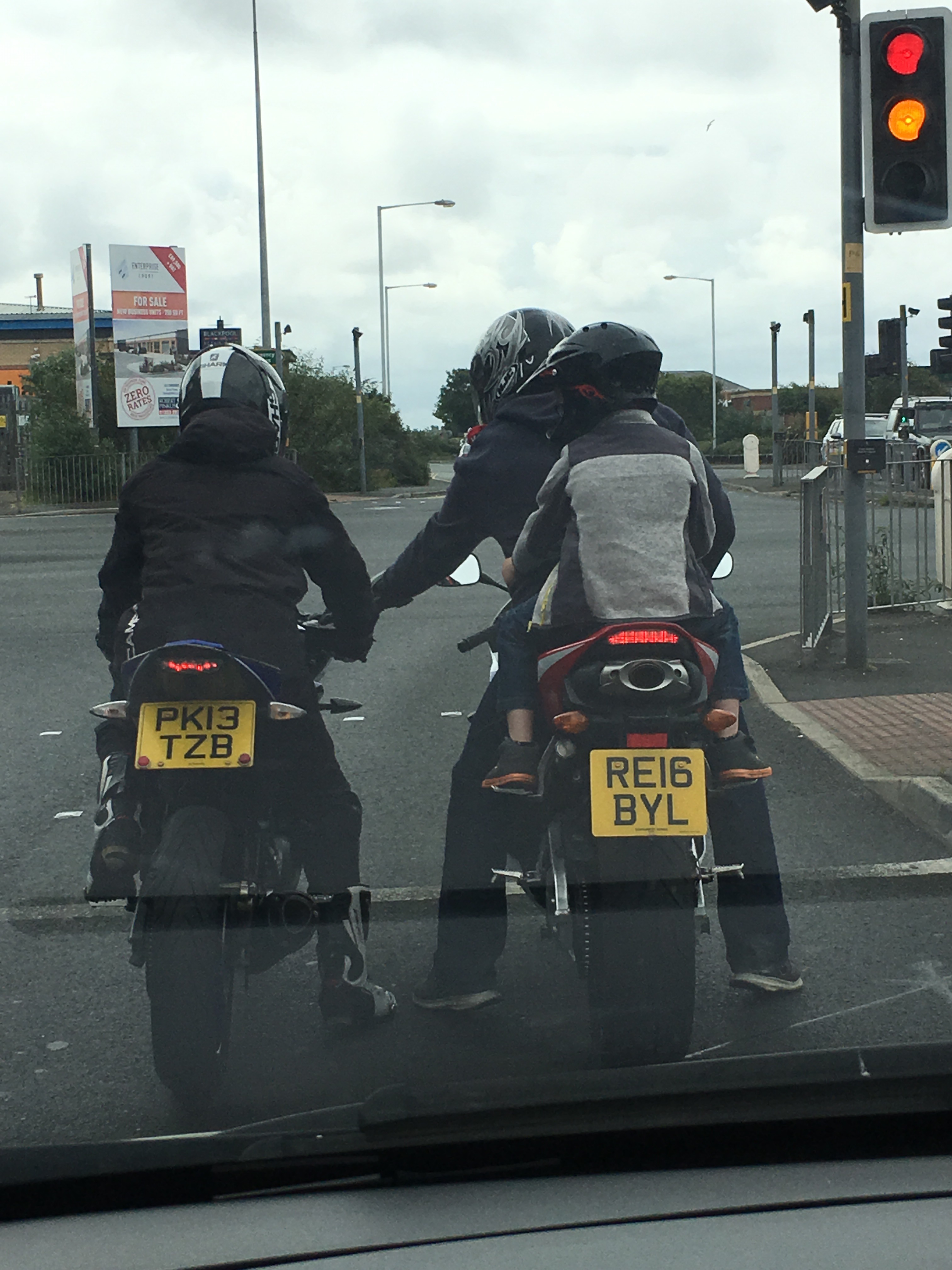 bmx helmets, too short pants, no safty clothing. not acceptable. tour childs life should be more valuable to you than your own.

British motorists have been warned about scammers posing as the DVSA.

The email scam being sent to many UK drivers boasts that they have an unclaimed fee from an overpayment on the system. The email is also states that the refunds are time sensitive so people should ‘claim now.’

These scams mostly direct you to a page where you will be asked to provide bank details and license information. Any details could be used in fake documentation and  They could use your card to purchase goods online from the information given from your driving licence.

A DVLA spokesperson has issued a statement to Asking the public to report phishing and not to reply or confirm their personal details or payment information. Anyone getting these should delete the message and don’t click the link.

After a series of weeks with website issues. The Dvsa web page is back up and running.

In balance to this argument, cyclists constantly run red lights. The very reason Boris Johnson’s almost identical bid failed. If cyclists obeys the Highway Code and motorised vehicle drivers have them the same respect as any other vehicle there wouldn’t be a problem.

A parliamentary report has suggested that cyclists should be given priority over drivers who could be forced to give way before every turn in a shake-up of road rules. Among 14 recommendations from the all-party parliamentary cycling group (APPCG), it was proposed that the Highway Code should be revised and that the driving test should be changed to help improve driver behaviour towards cyclists.

The report refers to the Turning the Corner campaign, led by British Cycling, which recommends a ‘universal’ duty to give way to cyclists and pedestrians when turning. A parliamentary report has suggested that cyclists should be given full priority over drivers who could be forced to give way before every turn in a shake-up of road rules

(Stock image) The committee, headed by MPs Ruth Cadbury and Alex Chalk, said: ‘The justice system is failing to protect cyclists, both by allowing dangerous and inconsiderate driving to go unchecked, and by letting down the victims of road crashes. ’Cyclists are too often the victims, but in a few cases they are also the perpetrators of road crime. ’Stronger legal grounding for a hierarchy of road users, in which children, pedestrians and people with disabilities take the highest priority, followed by cyclists, and finally drivers of vehicles, would help make the roads safer for everyone. In this report, the APPCG sets out fourteen recommendations for how the justice system can be improved. Among 14 recommendations from the all-party parliamentary cycling group (APPCG), it was also proposed that the Highway Code should be revised (Stock image) ’We believe that hundreds of thousands of crimes – committed by a small minority of road users – are going unrecorded by the police each year, resulting in a feeling of lawlessness and aggression that is deterring many people from cycling. ’Of our recommendations, one stands out as a priority: there has been a collapse in the number of drivers disqualified from driving. The licence to drive is a privilege, not a right.

People still think it’s ok to be under the influence as “its only weed”. Just no.

Driver sped down wrong side of the street

and crashed in front of police

A youngster who was three-times the cannabis-driving limit drove down the wrong side of the street past an off-duty traffic cop – before crashing his car in front of an off-duty PCSO coming the other way.

Swansea Magistrates Court heard the off-duty policeman – an advanced police driver of some 17-years standing – was stuck in traffic on the A4240 on the afternoon of March 15.

As he neared the Murco garage on the outskirts of the town he heard the sound of heavy revving from behind him.

A Ford Puma then passed the line of vehicles at speed, driving down the wrong side of the road towards on-coming traffic.

Sharon Anderson, prosecuting, said a PCSO was driving in the opposite direction at the time – heading for Morriston police station to start her shift – and saw the Puma driving directly towards her.

The court heard the driver of the Puma, Ashley Jordan Cann, then lost control of his car outside the Riverside pub, collided with two vehicles, and span 180 degrees in the carriageway to end up facing the way he had come.

Cann and a female passenger got out of the Puma and made-off on foot towards a nearby supermarket.

The court heard the off-duty traffic cop gave chase, and managed to catch the passenger. Cann was detained by another officer who arrived on the scene shortly afterwards. A subsequent test showed 20-year-old Cann had six micrograms of THC, the active compound in cannabis, per litre of blood – the legal limit being two micrograms. Cann, of Swansea, pleaded guilty to dangerous driving, driving with a specified controlled drug above a specified limit, possessing cannabis, and to driving without a licence or insurance. District judge Neale Thomas, sitting at the Magistrates court, said that given the seriousness of the incident his powers of sentencing were insufficient to deal with the case, and he committed the matters to Swansea Crown Court.

Cann was given an interim driving ban until he is sentenced.

THE DRIVING LICENCE—IS IT ‘SEXIST’ ? The DVLA insists on printing women’s titles but not men’s on licences. Why won’t it change its baffling gender rule?

Small, rectangular, green or pink, usually found in a pocket, wallet or occasionally down the side of the sofa – a driving licence is something millions of us possess, male and female, young and old. It’s strange, then, that the DVLA should process the licences of men and women differently. This is despite the issue being raised with the agency seven years ago by Zoe O’Connell, now a Lib Dem councillor for Cambridge.

Driving licences automatically include the titles of women – mostly in the Mrs, Miss or Ms format – while men do not have their titles printed unless honorific (doctor, reverend, etc). The agency has repeatedly refused to change this practice, which appears to place importance on women’s marital status but not on men’s, and arguably contravenes section 19 of the Equalities Act 2010.

It was brought to the attention of the DVLA in 2010 in a Freedom of Information request by O’Connell. “There is no reason for any form of gender identification on official documentation,” she says. “When it comes to titles on driving licences, why should someone need to know if I’m married?” She points out that despite the need for exceptionally high security levels within their profession, the armed forces removed all gender identifiers from their military IDs about 10 years ago.

In March 2017, Emma James of Guildford wrote to the DVLA, once again querying the practice. In its response, it stated: “The DVLA does not print Mr on licences but does print Miss, Mrs, Ms or other … If you do not wish your licence to display a title, send your current licence with a covering letter requesting it be removed.”

The DVLA and the Department for Transport both refused to answer why the licences of men and women are printed differently. Instead, the DVLA simply said that anyone could choose the “No Title” option, which is seventh on a list of eight options in the online application form.

The Guardian tried to approach the DVLA for further comment on several occasions, as well as the DfT. Both refused, with the DfT saying it was entirely a matter for the DVLA, before admitting that the DVLA does indeed report to them, so ultimately the responsibility would lie with them. Still, no comment was provided. In the meantime, if you would like your title removed from your licence, you can write to DVLA, Swansea, SA99 1BN. Perhaps the additional workload will spur its bosses into joining the 21st century.

I got one am 100% behind this. It will remove poor quality instructors therefore improving the standard out OUR children’s driving skills and making the roads safer. Driving instructors told they must publish ratings According to an article in the Times…

Figures show that less than half of driving tests are passed, with learners taking up to 39 attempts to gain their licence

Ofsted-style ratings for driving instructors will be published amid concerns that too many learners are being forced to sit their test repeatedly because of substandard tuition. The Driver and Vehicle Standards Agency (DVSA) is threatening to release rankings for Britain’s 40,000 driving instructors for the first time to steer novices away from poor-quality lessons.

It follows the publication of figures showing that less than half of tests are passed, with learner drivers taking up to 39 attempts to gain their licence – leading to long waiting lists in some areas. However the agency revealed that alternative plans mooted by the government over a year ago to introduce financial penalties to prevent badly prepared drivers from taking their test too soon had been scrapped. Source: The Times